Let’s take up a position in favour or against 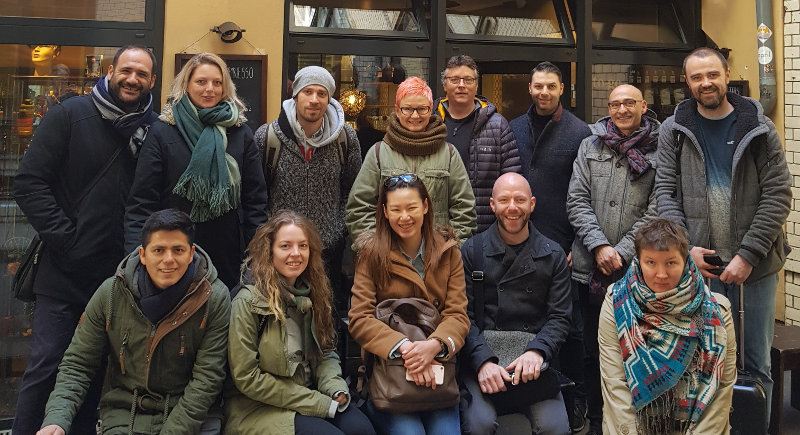 Courses conjures up the Simple past of the verb “to run” in Italian. No, this is not a grammar lesson, but what you can easily read it on the net, on social media etc.
Comparing notes and exchanging information about the coffee business is admittedly very useful and its spiralling flow is rocketing: if I run a course for two persons, each of them will in turn run a course for another two and so on, something very much like the network marketing …, so let’s take a closer look at how it all began, the current picture and what the future might bring.

Determining where it all starts is no easy task, but I can speak about my personal experience: as a student I did not really have the highest grades, but I understood how vital training was when I strove to achieve the things I was passionate about (coffee was not in the picture yet). I realised pursuing personal fulfilment was utterly, so I increasingly committed to my plans and got very much involved in the process … had I known it much earlier, I would not have wasted my time with school! Everything revolves around inspiration, someone please tell the Ministry of Education!

For the other two points, it suffices to repeat the epiphany I had in early 2014, when I was a coordinator of SCA(E) partners for Italy; I remember an unforgettable joke between my friend and journalist Nadia Rossi and me “It looks like there are more trainers than skilled baristas”.

Trainers, often baristas, either still up and running or former baristas, are commonly divided into:
Trainers certified by associations such as SCA, AICAF, INEI, AIBES,
Trainers certified by corporations with their own schools and academies
Self-taught trainers who have taken courses but are not certified, and a few who have never done any course.
On a side note: from my perspective the more renowned, reputed and reliable the issuing association, the more acclaimed the Certification!

Trainers in turn may :
a) have a personal school/academy provided with ad hoc equipment, which is a trend on the rise; they may be self-employed who are not registered for VAT and top up their wages running occasional courses, which is also quite widespread especially for LatteArt – a totally enticing, marketable skill.
b) be employees, often responsible for training – not a large number of these is available, but still a trend on the rise
c) be self-employed registered for VAT without a facility of their own, who often collaborate with a large company.
Let’s take a closer look.

Lots of the trainers who have gone self-employed, and have then set up schools or training centres must incur costs/expenses covering utilities and taxes related with the facility itself.
Going from a part-job to a full-time job is not easy, it implies a steady income, analysis of costs and benefits, advertising, etcetera.
The same happens if you set up a coffee house; until demand exceeds offer everything is fine, but competition can be quite a challenge.

Large companies in the coffee line of business have realised that a consultant supporting their activity is key, corporations usually have a trusted one as part of their staff, smaller firms share a trainer or turn to schools for a trusted, reputed and possibly local, consultant/trainer.
The idea of territoriality is a great asset to both local companies, like roasting entrepreneurs, who regard a trainer as an ambassador of the company itself to their customers, and to leading companies that need an exclusive trainer who sometimes has to relocate to keep the job. Also, language skills are seen as a plus because nowadays turnover of even small firms depend on foreign trade.

Other extra skills that make a trainer a very sought-after professional are: competence, specializations, certifications. I personally attach much more importance to other qualities, such as: charisma, flexibility, social skills, patience, and especially the ability to control megalomania.
Trainers, like baristas, are usually megalomaniacs who, pretty much like actors before the audience, enjoy their work and the social interaction associated with it; the risk is that it all can end up being a mere self-celebration rather than assimilation of information and subsequent transmission of knowledge.

In conclusion: a growing number of baristas have become trainers in the last few years. Obviously, not everyone measures up, but egged on by a desire to show off and because of an ever-increasing demand, some have set up ad hoc facilities and run training courses. At the same time, companies have started recruiting or creating these professionals, so demand for trainers from schools is declining.
I strongly believe that the future will bring fewer but higher quality schools. Likewise, there will be a large number of trainers (and schools that do not handle coffee roasting) linked to companies who, by virtue of their experience or the certifications they hold, will have made a reputation for themselves and will keep on training and joining in public events, in any capacity. At least 80% of the demand will be oriented on one’s own supplier, possibly until basic or elementary level, and should more specialized trainer be required, a deeper awareness will allow for the right decision.

I am very positive about the future: there will be a wider, better organised and widespread offer for training, as well as higher, more conscious demand. This will in turn avoid that training within the coffee line of business is regarded a useless or elitist trend, sometimes a bit off the beaten track, literally too! Coffee will no longer be seen as less important than blending, but as pivotal; it will be something without which opening a coffee shop would not be sensible… and barista will no longer be the Italian for barman.

Let’s take up a position in favour or against